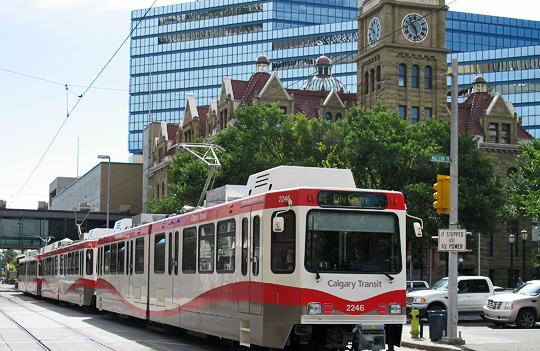 The following bus routes in the northwest and inner-city are changing on September 5, 2016:

Calgary Transit completed a major review of these routes in order to improve efficiencies and meet customer service goals. In February and March 2016, new bus route proposals were shared online and at open houses, and feedback was collected from thousands of transit users and community stakeholders. Public input was incorporated as much as possible in designing the new routes.

Why was this service review conducted?

The routes involved in the service review were underperforming in terms of ridership, with many having received service cuts in recent years. This has resulted in a lack of base service (a bus at least every 30 minutes, 15 hours a day, 7 days a week) throughout many established communities. The goal of the service review was to create simpler, more frequent bus routes that run later into the evenings and on weekends, with the limited resources available.

Direct bus service through downtown is relatively slow and expensive to operate. These routes do not have high enough ridership to continue this service while also meeting frequency and service span goals. The savings have been reinvested in higher frequency as well as evening and late night service in the affected communities. Alternative service is available on the LRT, which is undergoing a significant capacity increase with the introduction of 4-car trains. Alternative bus services are also available on Routes 1, 4, 5, and the new Route 90.

My route seems busy to me, so how could the ridership be low?

Routes may be busy at certain times of day, in certain stretches, or in one direction. However, the overall ridership may still be low. Calgary Transit conducts regular passenger counts and data from recent years shows that ridership on these routes is too low to continue as is, so changes had to be made.

Single-purpose peak buses, such as express routes, are expensive as they spend a greater proportion of travel time out-of-service than regular bus routes. In other words, they spend a lot of time driving to the starting point of the route with no customers on board.

Why do some trips now require transfers?

Transfer-free services are appealing for many. However, when a bus network is overly oriented towards avoiding transfers, it results in significant route duplication as well as slow, circuitous routes. The result is a network with relatively low ridership, low frequency, and short service span (do not operate into the evenings or weekends).

How were the routes designed?

The routes were designed based on four principles that Transit Planners following for creating an optimal transit network: reduce service duplication, increase the frequency of buses, make routes more direct, and extend transit service on evenings and weekends.

Will the bus schedules align well for transfers?

To the greatest extent possible, bus arrival and departure times at major transfer points such as LRT stations will be scheduled to minimize wait times for transfers between routes. There is also the possibility of interlining routes at certain times of day to minimize the need to transfer. For example, the Route A bus may turn into a Route B bus at an LRT station. Interlining of shorter routes gives Transit greater flexibility in targeting service for particular needs at particular times.

What public engagement was done for these changes?

Calgary Transit assembled a Community Consultation Team to review the initial proposals and receive detailed feedback. This team was composed of representatives of community associations that chose to participate as well as major institutional stakeholders.

In addition, in February and March 2016, Calgary Transit hosted:

In February and March 2016, Calgary Transit received online feedback from about 1,500 people. Information regarding this online survey was provided at the open houses and pop-up sessions, through social media, on signs at major bus stops and through on-board notices.

Did public engagement influence the plan?

The plan was changed substantially based on the valuable feedback we received from customers. For a route-by-route summary of the response to feedback, visit calgarytransit.com/2016ServiceReview.

I don’t think the new routes are better for me, so why is Calgary Transit claiming to improve things?

Some people may not find improvements with these changes because it’s not possible to ensure the bus network does all things for all people. However, Calgary Transit believes the new network is an overall improvement with bus routes that are easier to use and understand. By making the new routes more efficient and reducing duplicated service we were able to extend bus service on evenings/weekends and increase bus frequency, which customers told us they wanted.

How will I know which bus stops are changing?

Affected bus stops will have signs posted indicating future routes or any route removals one month in advance of the changes. These signs direct customers to the website or the Calgary Transit call centre for more information.

Will Calgary Transit monitor these changes?

Calgary Transit will closely monitor the new routes in terms of ridership, reliability and route alignment. Revisions will be made where necessary.

How can customers submit a comment, complaint or suggestion?

Customers can submit feedback online, or by contacting the Calgary Transit call centre at 403-262-1000.