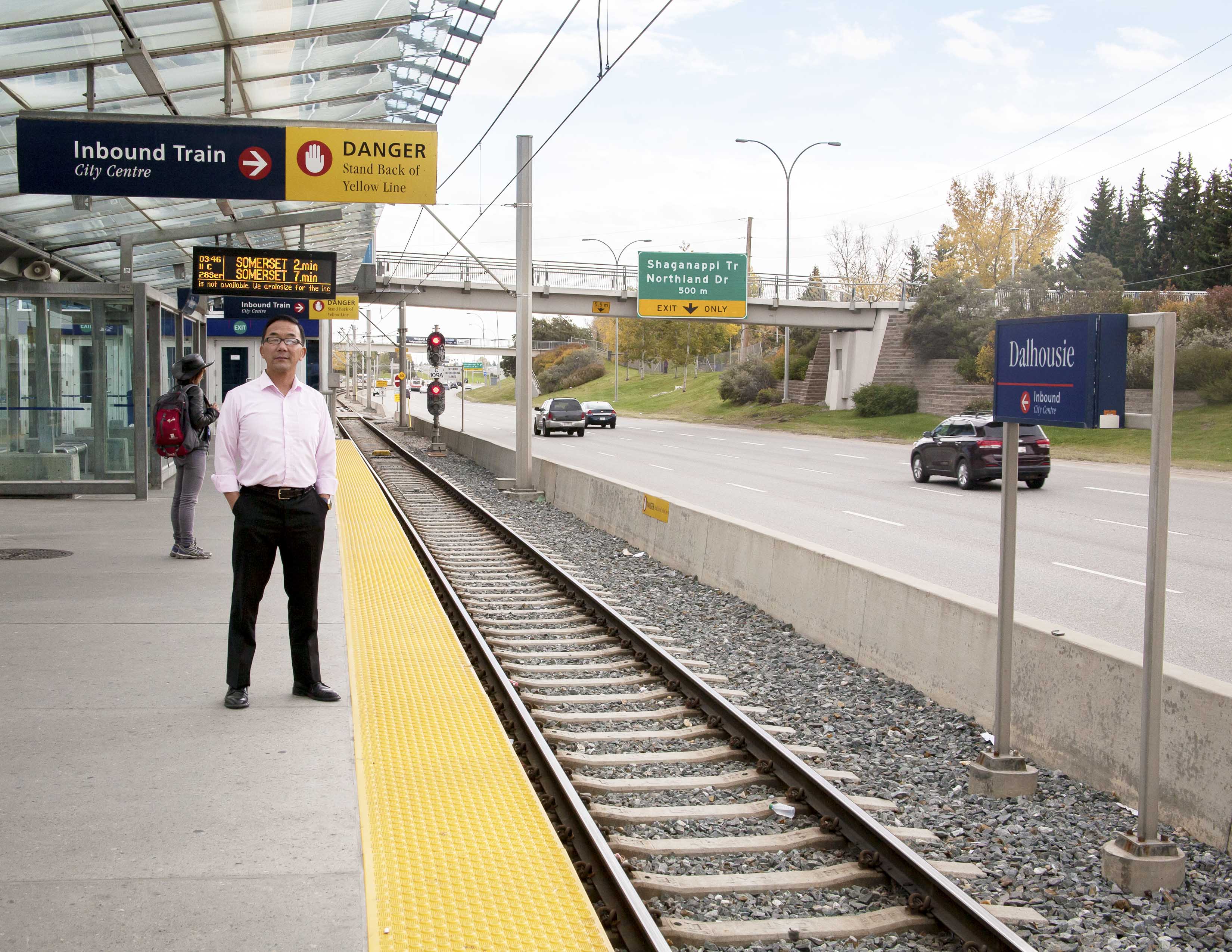 Green Line – Where I Stand

Ward 4 has not received any major investment in transit infrastructure for a very long time, and that is why I ran for election to fight for Ward 4 residents who for too long were neglected. The Centre Street corridor is the only route that makes a profit for Calgary Transit. The Green Line is the investment Ward 4 communities need to grow, and be the catalyst for further investment in our area by businesses who will want to call it home. It is starting already, but it can be even better.

When I first ran in 2010 it was the Centre North Line, and it was a long-term idea of getting the LRT to the far north along Centre Street. There was no discussion of the Centre North line as a realistic plan at that time, and the plans had it going up Nose Creek Valley. The largest project at the time being debated was the Airport Tunnel.

Fast forward to 2014 & the idea of a dual line that was called the Green Line was born. It would be a city shaping project. It offered transit orientated development to many communities, and Ward 4 would be completely changed for the better. It also did not pit one quadrant against another. I was in. Councillor Keating and the Green Line advocacy group deserve many thanks for this.

Inner city communities along Centre Street with the Green Line would attract more investment in development, and give more opportunities for businesses to set up. It also would restructure transit routes, and lead Calgary in a path forward where the downtown core is not the focus. This is happening across the City. From Quarry Park, to Currie Barracks, to the East Village, along Macleod Trail to Southland, West Campus – all of these are creating density throughout the City from the core, and the Green Line would add that TOD density to the Centre North. It was a vision for the Centre North that that many needed. The return on investment was high for such a bold plan.

In 2015, Michelle Rempel got the first funding from Ottawa. Without her, the Green Line would still be a line on a map. With her determination in Ottawa, she launched the City into planning a project that was not on their radar months before. The number we were told was $4.6 billion.

Later in 2015, my office along with a 2 other Councillors did a massive survey of 8,000 Calgarians; the largest survey of its kind in Alberta, and the vast majority of Calgarians said they wanted the Green Line. Not surprisingly, those along the route were in the high 60-70+ percent range of support. We used this to show other Councillors that this is wanted by many Calgarians, in every Ward, and that our Council could not waste this massive source of funding. We got the support of Council.

Years of door knocking in my Ward I heard the same message ‘I want the Green Line’ mixed with a justified attitude of being ignored. Now with the Green Line, my Ward would finally have the desperately needed mass transit and show that with some determination and a vision, my Ward would benefit after years of neglect.

The majority of Ward 4 residents and Calgarians in the engagement town halls and online submissions chose the Centre Street route because this would spur investments and growth more than other routes of Edmonton Trail or along the Creek.

Door knocking that summer in 2016, I saw a change at the doors. Residents saw something for them and their quality of life, and showed support. Now it was for the Province to step up. This would only occur in 2018, after much frustration.

The rug was pulled out from under us in May of 2017 when the City Administration told us that the original 46 km for $4.6B would not be enough. I like many were frustrated and beyond angry. We were sold a vision, and it would not serve the North. After a year of engagement with Calgarians, who after a year and a half of economic hardship had a vision of something to look forward to, as we always have in the past, it was then cut in half.

In the 2017 Election, my message at the doors was simple: we need the Green Line; but in order to do that I need to make sure that Phase 1 of the Green Line is done right and ensures that when the ribbon is cut, the shovels continue north the next day. I was proud to be re-elected and the Green Line has been that focus. There cannot be a stop-build process that we saw on the Blue and Red Line.

With Ottawa now showing an interest in funding large transit projects, I see a path forward for Phase 2. However, Phase 1 needs to be done right, and I believe under the plan before us it does that. The Green Line team worked with developers on a plan that allowed the Green Line to be incorporated into new buildings, as we see with the Calgary Library. The City cut costs by moving the alignment slightly, scrapping the tunnel underneath the river, and from that removed the stations that were seven stories underground, a plan that was not what Calgarians wanted. The City came back with this new plan, and it makes sense. There is no such thing as a risk-free mega project, but there has been much mitigation of risks by Administration.

I also understand there will be some amendments on Monday, I will listen carefully to see if they will benefit Ward 4.

I am critical of Administration, god knows they know it too, but their work on the Green Line, the massive amount time it took to get this plan from a line on map to where it is now, needs to be applauded. It was in 2014 that this idea of a dual line came to be, and in June 2015 we said: ‘Here is $1.53B from Ottawa, and I will go get the other $3B – start planning!’ This is not something that happens often. We had the line route on a map, and chose the colour green. The City had to build a plane flying.

Politicians are not engineers, and our plan without a doubt would be changed when meeting with the cold reality of bedrock, utility corridors, and the hundreds of properties that needed to be purchased or moved. The plan before us has had major changes, but it allows the LRT to move north, and this week Ottawa has shown an interest in such a plan. There is a path forward.

The Green Line stopping at 16th Ave will have the ability to come north, but stopping it in Eau Claire means that the north might not get an LRT. As I said above, Ottawa is showing an interest in funding projects that move people, and take cars off the road. The Green Line is that project. If Ottawa ready to talk, so am I.

I often get asked what this means for residents along the route. It could be the City buying the entire house, to a foot of land, but each one takes time and is still ongoing. In the meantime, the BRT proposed from administration is the best option for Ward 4 future LRT. This means bus queue jumping, traffic signals that prioritize busses, bus only lanes during peak times, and dedicated bus lanes, amongst many other changes.

The S.E. is just as angry as the Centre North at the lack of LRT, and with signs that Ottawa is interested in funding transit projects of this scale, I have my path forward and I encourage my colleagues to work with me on Phase 2 funding. There are 300,000 Calgarians impacted by Phase 2, and indeed the far north is going to have a massive population growth in Keystone. We must build for it that future growth.

I totally understand the frustration that the City is spending money on the Green Line, and yet it is still not being built. The reason is the City has to buy land, and prepare it, a cost that has grown to $214 million so far. Utilities will have to be moved and construction done, and that has totaled $108.6 million so far.

The City also has to buy over 300 properties on the Centre North line alone, this could mean a house to a foot of land on someone’s property, and these are done in good faith. This is someone’s home we are talking about, and it is not done overnight.

To give you an example, this means the City had to purchase the land from the old Shamrock Hotel and demolish it, and work with Lillydale processing plant in Ramsay to move east of the City. This is what is involved to prepare the line. You have to pour the concrete holes first, before you build the deck.

The emails that ask for us to kill the Green Line, and stop spending, I get the anger but the funds for the Green Line are already allocated. God knows I am a fan of cutting spending, but this project will benefit all Calgarians and especially Ward 4.

The Green Line transit expansion is moving our City forward for the next generation. I have a duty to watch your tax dollars, and have done so without reservation since being elected in 2013, but I must also see a long-term vision for my Ward, and this project does that. The majority of my residents are in favour of it. From polling with reputable companies, to door knocking tens of thousands of doors a year.

Killing the Green Line is saying to the tens of thousands in my Ward who use transit daily that it will not get any better and you must accept crammed busses forever, is grossly unfair. I do not accept that. Centre Street busses are maxed out, and LRT is the only option. Centre Street is the only profit making section of the entire Calgary Transit system, yet we do not have an LRT.

I will only accept the BRT as a temporary solution, it needs to be LRT and for some time I have asked for a re-think to add a BRT to 4th Street N.E. to take pressure off Centre Street. The busses today are maxed out, and without a LRT will mean we will have to place more busses at high operational costs to meet the demand. Often at the doors, Ward 4 residents tell me that they often have to take a bus north simply to get on a bus heading south to ensure a spot, which is ridiculous. Over 30,000 Centre North residents take the bus each day, and it will only grow.

Compounding the problem we have today with a lack of LRT in the north, is the massive growth planned for the area of Keystone. This will be 30,000+ more people. We need LRT to move them across the city, from an area that is represented by Ward 3 Councillor Jyoti Godek, who has been fighting hard for her residents since 2017.

There are other amendments being pushed forward on Monday. I will listen intently and defend Ward 4, as we need the LRT. I am voting YES to the Green Line. However, I will continue to apply a critical eye to this project to make sure this benefits Ward 4. I have advocated for it since 2015 and for what it represents; a way forward for the Centre North that for too long has been ignored. I encourage my Council colleagues to vote with me.

For more information on the plan, and what Council is debating, click here.

For an infographic on the Green Line benefits, click here.